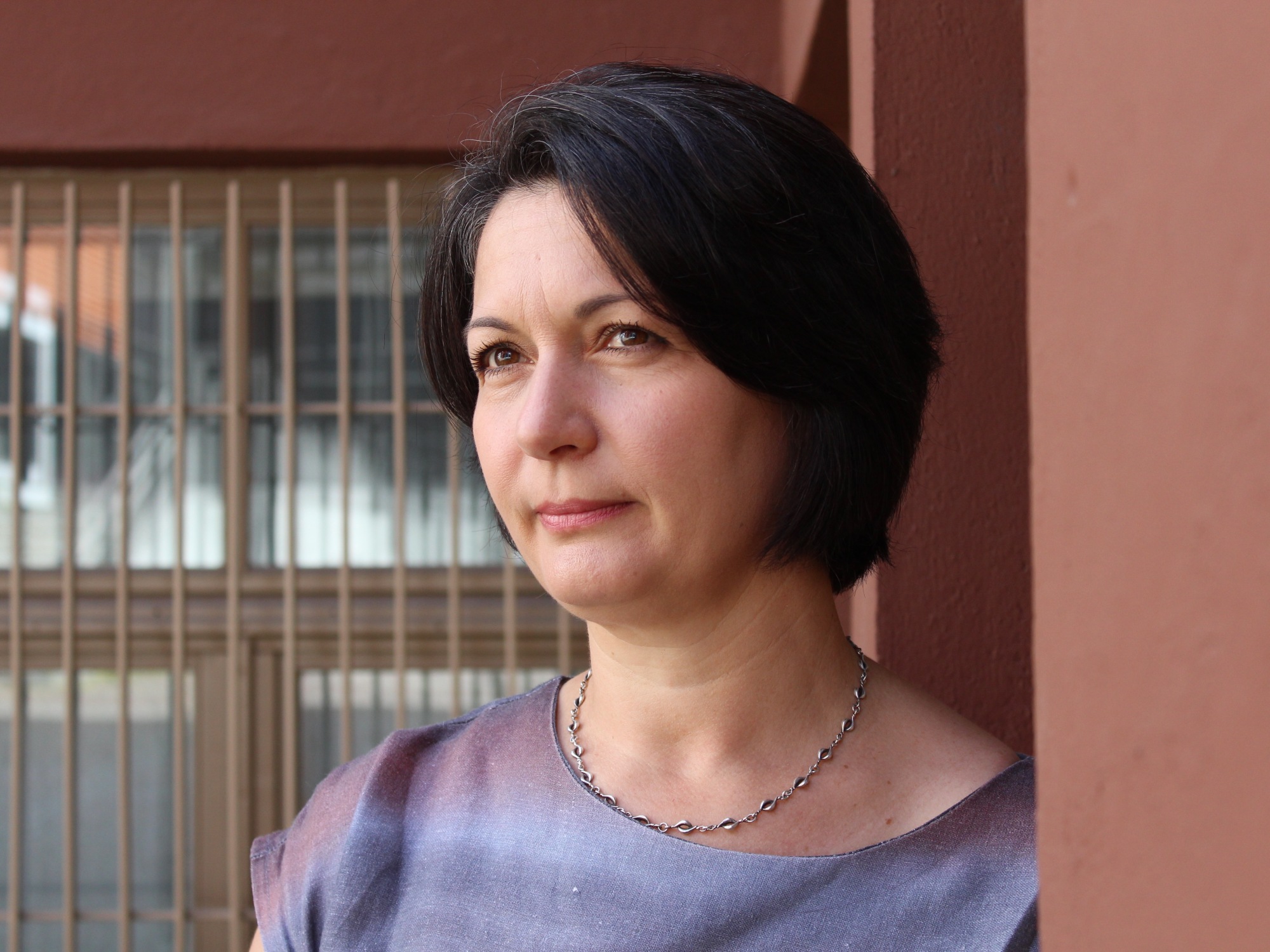 I was born in Albania, but I have lived half of my life outside my homeland. I was living in Italy and Denmark before I met my husband and then we ended up moving to Finland. I moved here to learn Finnish before we got children so that I would understand when my husband would talk to the kids. The plan was that we would stay here for a couple of years, but now it has already been 14 years.

I met my husband at the Roskilde festival (In Denmark) and we fell in love. I felt like I found home with him. It took time, three years before we made the decision to move to Finland because I didn’t know anything about Finland. It’s a cold country and there are lots of lakes – and they have Santa Claus. That’s all I knew about it. Then we decided to come and it was a shock. I came at Christmas in 2004. It was so cold. There was the worst snowstorm ever and it took 5–6 hours to come here, we came through Sweden. I thought, “What have I done? Where am I going?” And everything was very dark and what I experienced in the beginning, that was very difficult. I was not be able to get contact with people. I found that people don’t really like to make eye contact in general and they don’t really say hello if they don’t know you. So that was tough and the language was tough. I was very close to giving up, but I don’t give up. So I decided I won’t let the Finnish language beat me, I had to beat it. When I went to buy a train ticket for myself in Finnish already in February after I arrived I felt like a winner, like Rocky Balboa. It was the small things that mattered back then.

It was a convenient choice to move to Finland so that the kids would have at least half of the family near. We have lots of friends in Denmark and my parents are in Albania. In a way it was easy because I started working as a teacher for children from Kosovo as soon as I arrived here. I was teaching them the Albanian language. I hated to be dependent upon my husband at the beginning, I had been in charge of myself since I was 15 and sometimes I came home crying because I needed my husband to be with me everywhere to deal with things. But I guess a strong relationship helped and my husband was very patient and said that everything will be alright. He was a huge support. I also did manage pretty well because I knew, as a social worker, what needs to be done and you manage pretty well in English here.

I studied intercultural communications when I came and then afterwards I got a job. In 2007 I think it was. I have now had the same job for 10 years. I work as a social worker for the quota refugees that come into town. I have also studied international social work in Denmark. So I’m very satisfied to be in a city where they do that kind of thing. I will now be Johtava sosiaalityöntekijä – the leading social worker. I love working with the clients, but also I think it’s time for me to pass on the information I have to the new social workers. At the moment we have customers from Iran, Iraq, Afghanistan, Sudan, Congo, Burma/Myanmar, and Syria. Being a foreigner, I have to be careful so that I don’t project my own feelings on my customers, do I see them suffering or me suffering, do I see them missing home or is it me missing home?

“When I went to buy a train ticket for myself in Finnish I felt like a winner, like Rocky Balboa”

To work with children or someone who needs help has always been my goal in life. The people I got to know from work as my colleagues when I started as a social worker were the ones who made me feel at home here. They got really close to me. Unfortunately I lost the key person, she got cancer and died a few years ago. She was like a big sister to me and we would have big discussions about why this and why that in Finland, also about the different national holidays, family life here.

I come from a place where a large family is really important and they take part in all the crises you would have. But here you are left on your own, I mean I know it’s not like that for everyone, I’m generalising. But for example if we have struggles as a couple then we have to figure it out together. You don’t go and talk to your mother in law about it. I think I will never get to know why people don’t say hello here, they don’t even know why they do it. They are just used to it. My husband is a typical Finn in that way, I don’t know if he has changed since having kids. Once we saw a father who came out from the airport in Denmark and his wife and kids were there to pick him up and the only thing he did when he saw his kids was to tap them on their head. We didn’t have kids at the time and I told my husband that if he ever did that I would kill him.

The way I’m with my children is one thing, I’m very physical and I hug them and kiss them, hold them on my lap. And one day my daughter started commenting on that and asked why I was being so weird when none of her friends’ parents do it and how come I do it to her friends as well! Her best friend moved to Helsinki and when she visits her dad in Jyväskylä and comes to play with my daughter then of course I hug her, I have not seen her for two months! My daughter can see there how we are different. I think if they don’t learn that physical contact when they are growing up then they won’t learn it later in life. I think the way I am has affected my husband and the way he is has toned me down a bit. Maybe I don’t hug people as much anymore.

Where we live now is very international and I know my neighbours, I know the children and we keep the doors open so that people can come and go. They don’t do it as much as in Albania, but anyway. We do have this drop-in culture here in Kortepohja in Jyväskylä. The area was like that before we moved and I think that might be a reason why we moved there. Especially when the kids were small it was seldom we had lunch without other kids at the table or my kids would come home and say they already ate. There are many families there with double cultures and my best friend lives right next door, she has a triple culture.

“I still feel like I’m travelling because I meet so many people from different backgrounds and cultures. I have learned a lot about life through my work”

To me the most important thing is to have healthy children who have a strong identity. But I do also hope that they would get some of the culture, the folk music. It’s so spiritual and you can’t really find the Balkan beat from somewhere else. So I try and touch them with some Albanian music. My parents come here every year for two months. They don’t speak English, but my husband speaks quite good Albanian. He started to study already when we met. He does not speak to me, but he hears me speaking to the kids.

I think you see the world differently when you see different cultures and I’m so happy about our children because they get that. They wonder how kids don’t want to learn new languages and when we talk about politics they wonder how you can just be a perussuomalainen. Like, how can they think that way? An 8-year-old thinking that. You don’t live in a box, you are a part of the world. They also make us, as parents, think about things, because we have to answer questions. I work with people of all ages and even if I don’t get to travel as much as I would like to I still feel like I’m travelling because I meet so many people from different backgrounds and cultures. I have learned a lot about life through my work.

Interview by Peter Seenan recorded in Jyväskylä, Finland in 2017. If you wish to support our work in sharing the reflections of people who’ve moved to Finland please like our Facebook page and share Margarita’s story.