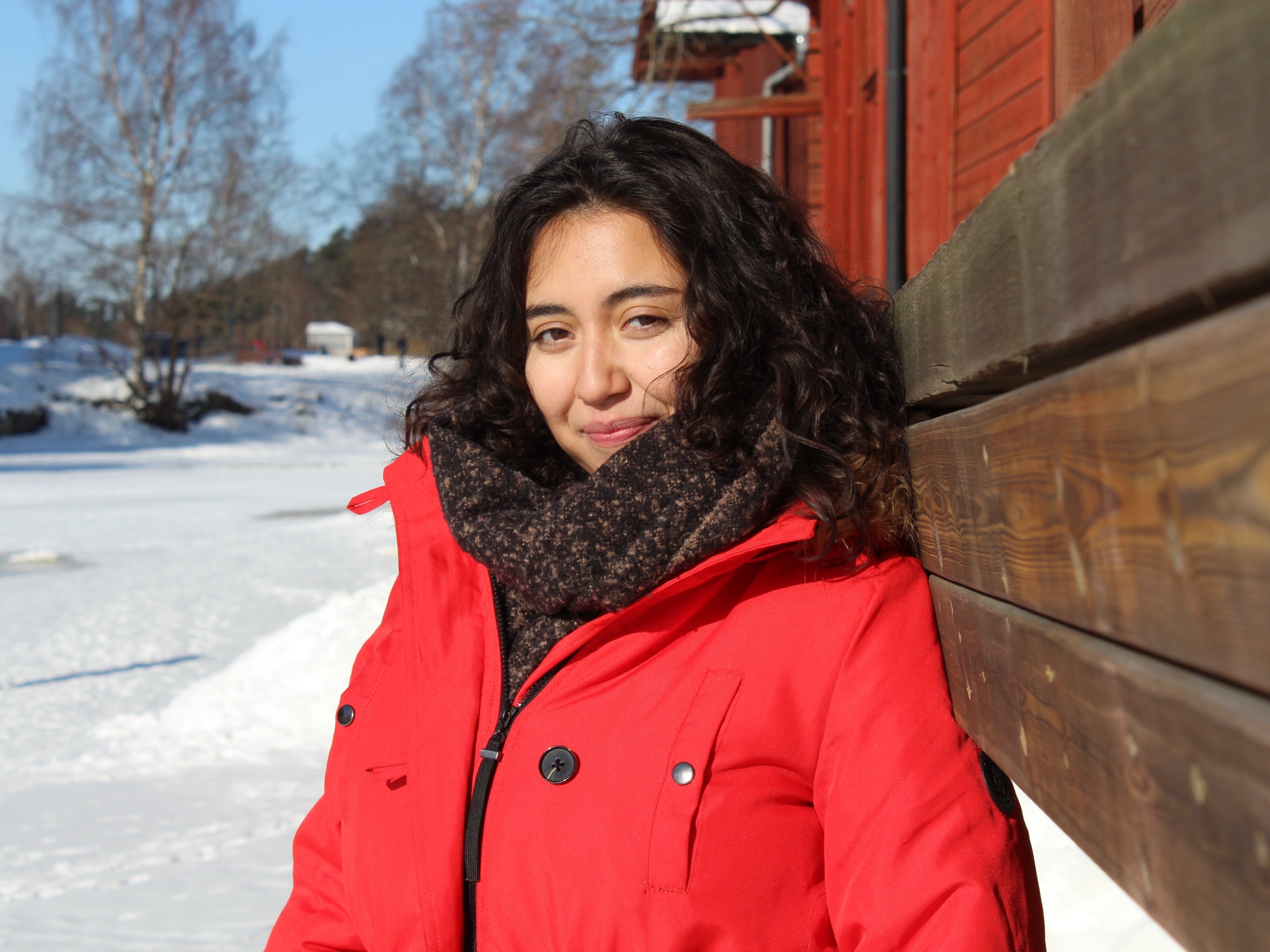 I first came to Finland for a high school exchange when I was 17 and then I wanted to come back. I liked it so much. It took me 6 months to make friends, but after I left I kept in contact with them. It may take a long time at first, but then they are your friends forever.

I’m from Chile and I always wanted to go abroad, but it’s really expensive to go on exchange. To my school in Chile came a girl from Finland in 2013 and I was one of the only people who spoke English so I helped her. She had problems with her host family there, so she moved to my home and became my sister. During her stay she asked if I wanted to do an exchange in Finland and told me that her family always wanted to have exchange students in their home.

I knew Santa Claus was from here and I also knew about the education system. I was expecting that it would be completely different and that I would not have any life because all of the studies. But it was what I always wanted a school to be like. I felt privileged to be in a Finnish high school.

I think the information about Finnish schools has reached Chile because there are issues in education and in Chile there are people studying Finland. But they have not seen the system from the inside. They think that you study all the time, when it’s actually students learning and not memorising. Thinking, and learning critical thinking.

CLAUDIA LORCA: “Because I am an only child people said my mum loved me too much to let me go. But that was a big misconception.”

I was in Lärkan in Helsinki and I lived in Espoo. I was surprised how everything had a structure. I was also surprised by the free food. I could not believe it. It was so good, everything was so clean. In Chile you have to pay for it and in some schools it’s not so good, not the same hygiene standards. Here you had even vegetarian and vegan options.

When I left Chile for my exchange it meant skipping the last 6 months of high school and graduation, but at the same time I think I learned much more here. Before I Ieft, people in Chile thought I was kidding. They didn’t really know where Finland was, didn’t understand how it was, didn’t know what it was to leave for a year to a place where you really didn’t know anything. But at the same time it was a weird and great opportunity.

Because I am an only child people said my mum loved me too much to let me go. But that was a big misconception. She loves me so much she was going to let me go and accomplish what I wanted.

When I went back to Chile after my exchange, my teachers wanted to hear about my experiences and they could not even imagine the quality in the system. In Chile, the teachers work 44-45 hours a week for half the salary. Here the teachers are seen as something appreciated and very important. In Chile, teachers are still fighting for their rights, and probably they feel they won’t see the change during their career. There’s especially one teacher who was asking and when I went back home last Christmas I met her. We keep in contact via Whatsapp. I think the teachers see me now more as an adult and they really want to know how I feel about it.

After my exchange, I felt Chile was not right for me. There I was doing so much more, but here I had more opportunities. I felt I was kept from all the things I wanted to do and luckily Finland was still free in 2016 when I applied to come back. It was actually cheaper to come here than to study in Chile. Living here was cheaper and the studies free, in Chile the rent and studies would have been more.

CLAUDIA LORCA: “In a room of Finns I’m sure they will remember me, but then again in job interviews if there are 10 Finnish applicants and me they will probably not take me.”

When I came back the first thing I noticed off the plane was the smell of Finland. Now I’m taking a degree in tourism at Haaga-Helia in Porvoo. I started August 2016. There are people from all over the world, but for me it was the easiest to get to know the Finns because I knew how they were at that point.

I think to describe a Finn to another foreigner would be to say that they might come across as rude or not interested in you, but you have to understand them and respect them. They won’t ask questions even if they have them, because they don’t want to seem stupid. They have been taught to never ask. If you ask and show interest they will start opening up. I think you need to be the one taking the first step, but it can be hard and annoying sometimes. Once you warm them up, they will ask you loads. I think in Finland people will listen to you and help you if you show you are serious and really have your feet on the ground.

I have not had a moment in Finland where I would think, “What the….” In a social aspect I feel I have an advantage because I’m a foreigner, but also I think depending on the person it might be a disadvantage. In a room of Finns I’m sure they will remember me, but then again in job interviews if there are 10 Finnish applicants and me they will probably not take me. It’s not so good for me that they always have the stereotypes of latinos being late.

During my exchange I got on a train and met a racist woman; it was about 1 month after I moved. There were also other immigrants on the train, and she started to speak to me in Finnish. Then she changed to really bad English and I didn’t really get what she was saying. It didn’t make sense to me at all. It didn’t cross my mind that it would happen.

I’m sure there are many people who get it more, but my first thought was “wow, it really happens”. I had been here just one month and when I saw that I thought that Finns are actually racist. But when I got to live here I realised it’s not the way. I feel the Finnswedes are the least racist people in the world.

CLAUDIA LORCA: “Sometimes I feel like defending Finland when I hear other foreigners saying bad stuff about Finland all the time. I mean, it’s okay to have a bad day and rant about Finland, but if every day is like that…”

In Porvoo I’m doing a 3-and-a-half-year degree. I just turned 22. I can’t say about the future, but I could think of staying in Finland. I like seeing new places, but every time I travel in Europe I feel so many things work better in Finland.

I have learned to appreciate nature more in Finland. I’ve learned in Finland that it’s a necessity. I remember flying over Brazil and seeing the Amazon and how it’s burning. I have got an interest for nature that I didn’t have before.

I study tourism. I like learning about cultures and I think that’s the direction travelling will go; not just going to the touristic places but actually learning about the culture. I think, especially, the Nordic capitals try and get you to try their lifestyle and get to know the local system of living. I feel Finland has still something to work on when it comes to that, but I think the ‘badass’ branding was a great thing.

Kamal, Lebanon: “I would be crying because of the snow and 2010 was the coldest winter, very cold”

Amjad, Pakistan: “I just strongly feel that people need to meet each other. That’s why I wanted to share my story”

Andruta, Romania: “Seeing other women were so comfortable with nudity in the sauna made me more willing to embrace my own body”

Interview by Peter Seenan recorded in Porvoo, Finland in 2018. If you wish to support our work in projecting the voices and achievements of immigrants in Finland please like our Facebook page and share Claudia’s story.