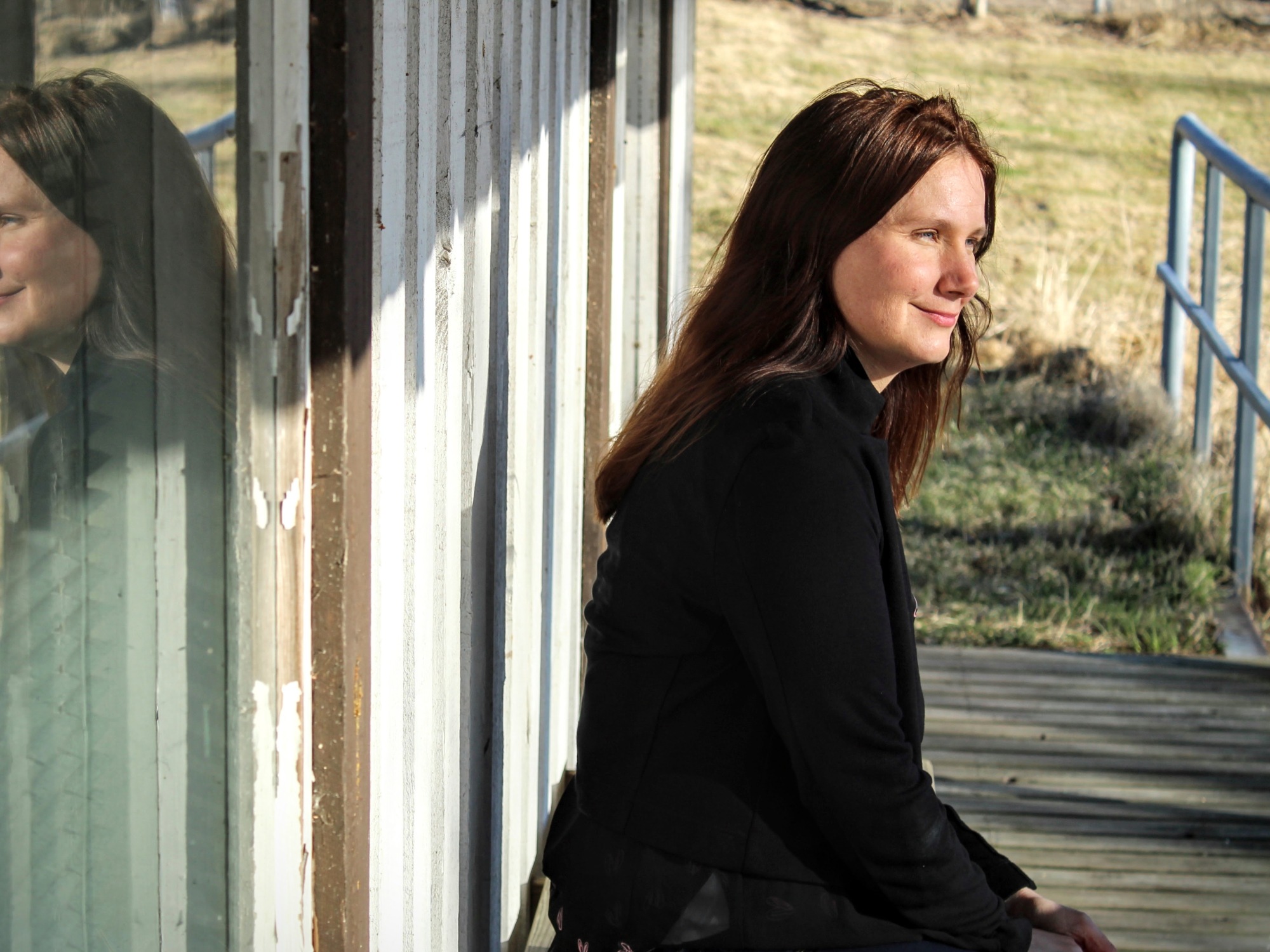 My name is Mel, I’m from Michigan. Basically I’m in Finland because my family is originally from Finland. My parents moved to the States, but they never talked about Finland much. Mostly I was not raised by my biological parents and I didn’t really grow up with a big Finnish identity. I think that’s what grew my curiosity. They didn’t teach the language, and I just picked up a few little things on my own. I came over here for the first time 12 years ago, 2005. I immediately felt I was home.

When I was in college there was a ‘study abroad’ fair and I went up to the lady running it and said I wanted to go to Finland. When I told her I was studying biology she told me that the only programme I could study in Finland was railroad engineering. “Great, sign me up,” I said. And off I went.

Thanks to the studies I could get a loan for the travel costs and I could afford the trip. For one summer I studied railroad engineering in Tampere. It was very interesting. I knew nothing before I came. I asked the professor about the course and there were no demands to enter, but it was a senior-level engineering course. The professor asked what my experience was and I said I had none. He asked about my math level, it was not great. He told me it would be challenging, but if I was up for it he would take me. Thankfully we did a little bit of studies in Michigan and then we went to Chicago to study the rail industry there. So I had a little bit of background when I arrived in Finland.

At the time I was just thinking, Finland, Finland, Finland, I want to get there. That first day I just remember being so jet-lagged and they were touring us around and showing us stuff. I was barely standing up straight, I could barely eat. I had never travelled so far before. My uncle lived in Tampere so that worked out really well and unlike the others in the programme I had a local connection. I went to his place and stayed there often on the weekends.

“I was scared that I would have to choose between the person I love and the country I love. Thankfully it didn’t come to that. It was not an issue”

We had connections to the relatives in Finland, but it was distant. I mean, it was before internet so you had to write and phone, and the calls were really expensive. I got a basic Finnish course that summer. I learned some everyday phrases and supermarket words.

After I went back to the States I felt that I needed to come back to Finland. I was an undergrad at medical school and I just didn’t know at that time how and when I’d be able to come back. Last August I will have been back here for three years straight.

What happened in between was that I kept coming back to Finland. I saved my money and did everything I could to come back. The first time was two years after that railroad course. We flew over from Sweden and as soon as I saw land below me I started crying. Shawna was with me. We had been together about two years at that point and it was getting serious. I knew I was going to be here one day, I didn’t know how, but somehow. So I brought her here for the whole summer and it was an unspoken, “if you love me, you will love Finland.” We could stay for 90 days with the travel visa so during that time I booked her onto an introductory Finnish language course and thankfully she fell in love with it. I was scared that I would have to choose between the person I love and the country I love. Thankfully it didn’t come to that. It was not an issue.

So until I moved here I kept making trips more and more often. The year before I moved I travelled three times to Finland in one year. My cousin sat me down at Christmas and said, “You are doing all these trips and it’s getting expensive, why don’t you just move already?” I said that I was going to someday and he said, “how about now?” That stuck with me and three months later we were on Skype making all the applications to study here. I didn’t know how I was going to make it work. I dropped out of medical school and sold my house. I’d worked for 13 years to get in there and I was on the path, I was committed. But I realised that my love of Finland outweighed my love of medical school. It took me an hour to speak to the dean before I could sign the paper. The dean completely understood where I was coming from and she was supportive. She knew I was making the right decision. That is now three years ago, and I don’t regret it at all.

“I almost bought a Kotipizza in Tampere”

When I arrived here I came for an 11-month hairdressing programme. I had waited too long and I missed a lot of the application deadlines for all the programmes so I just signed up to anything to see where it would go. The good thing was that no one in Finland knew that I was coming from a med school, so they didn’t look at me weirdly when I went for a hairdressing course. Also, in Finland it does not matter that much what your profession is, it’s more equal, and it matters more who you are as a person. I still wake up every day so happy to be here.

I have been with Shawna now for 11 years. We got married in Canada in 2009. We got engaged the summer Shawna first visited Finland. When Shawna was going to come she knew only what I had been telling and I used to speak Finnish to her even if she didn’t understand me. She also knew about Teemu Selänne, her favourite player. She played hockey as a kid. Shawna was studying pre-pharmaceutical studies, chemistry, and then she went on to become a pharmacist. Life was set for us back home, Shawna had three job offers. She walked away from those for me. She graduated in May and we moved in August. And now she is cleaning rooms to be with me. I don’t know how I got so lucky.

Before I came here I had an idea what Finnish culture might, but it has been very different. The cultural roots in Michigan are from the late 1800s to the 1900s. They don’t pronounce the names the same way and the words mean different things. When we arrived it was very hot, unusually hot.

That first Christmas we spent at my cousin’s place and then we were driving up to Rovaniemi. I was thinking that I can live anywhere in the country. I remember driving through here in Ii and seeing the sign. I said to Shawna that it’s a funny place, just called Ii. She kept on saying “Iiiii, Iiiii, Iiiii” in the car and that she wants to live in Ii and then we laughed about it.

I mean the idea was originally to get a job as a nurse, I was a nurse before the medical school. And Shawna would get a job as a pharmacist. Things were not going as we thought. So then I was looking for something that would be on sale, and my cousin, who has been very helpful in all this, pointed me to a website where people are selling their businesses. I went through quite a few and I was looking for months. I almost bought an adventure course park, but it turned out not to be a safe investment. It was in Tuuri. I was getting to the end of my hairdressing programme and nothing was opening up. I did also plan to apply to business school. Basically I wanted to have my own business no matter what I was doing for work. I applied to Haaga-Helia and got in. But in the back of my head I was looking at these places to buy and I almost bought a Kotipizza in Tampere. And just as I was going to say yes to that this place (Iin Sillat) opened up. So I got in contact with the owners and they said that we can come and have a look.

I was here for 30 minutes and I was waiting for the fault, like what was the problem in this place. But there was none. And I was provided a record for the last 10 years of business. I came alone at first and I was a bit scared to tell them about Shawna. Thanks to the Finnish language I could mention my partner without any gender. Then finally once I knew, or we were getting serious, like the fourth or fifth meeting, they asked me where my “mies” was. I knew from past experience in the US that older people have a hard time with this, so I collected all my courage and said, “hän ei ole mies.” They were very normal about it. I’ve learned here that people don’t really care, it’s me that has to adjust. I’m holding myself back less and less. I have never had a bad reaction from telling anyone, I have not got a negative response to us being a female couple.

When we had decided to buy this place we came over every weekend to see how things are done. In the end I was getting anxious to get it. Then finally one day they called and said, “okay, it’s ready.” They didn’t show much emotion, but the lady sat on a seat where you put your shoes on and said, “43 years I have lived here.” I could feel how hard it was for her to walk away. It was the night before we got the place when she hugged me, and didn’t let go. She said I was like a daughter to her.

Interview by Peter Seenan recorded in Ii, Finland in 2017. If you wish to support our work in sharing the reflections of people who’ve moved to Finland please like our Facebook page and share Mel’s story.