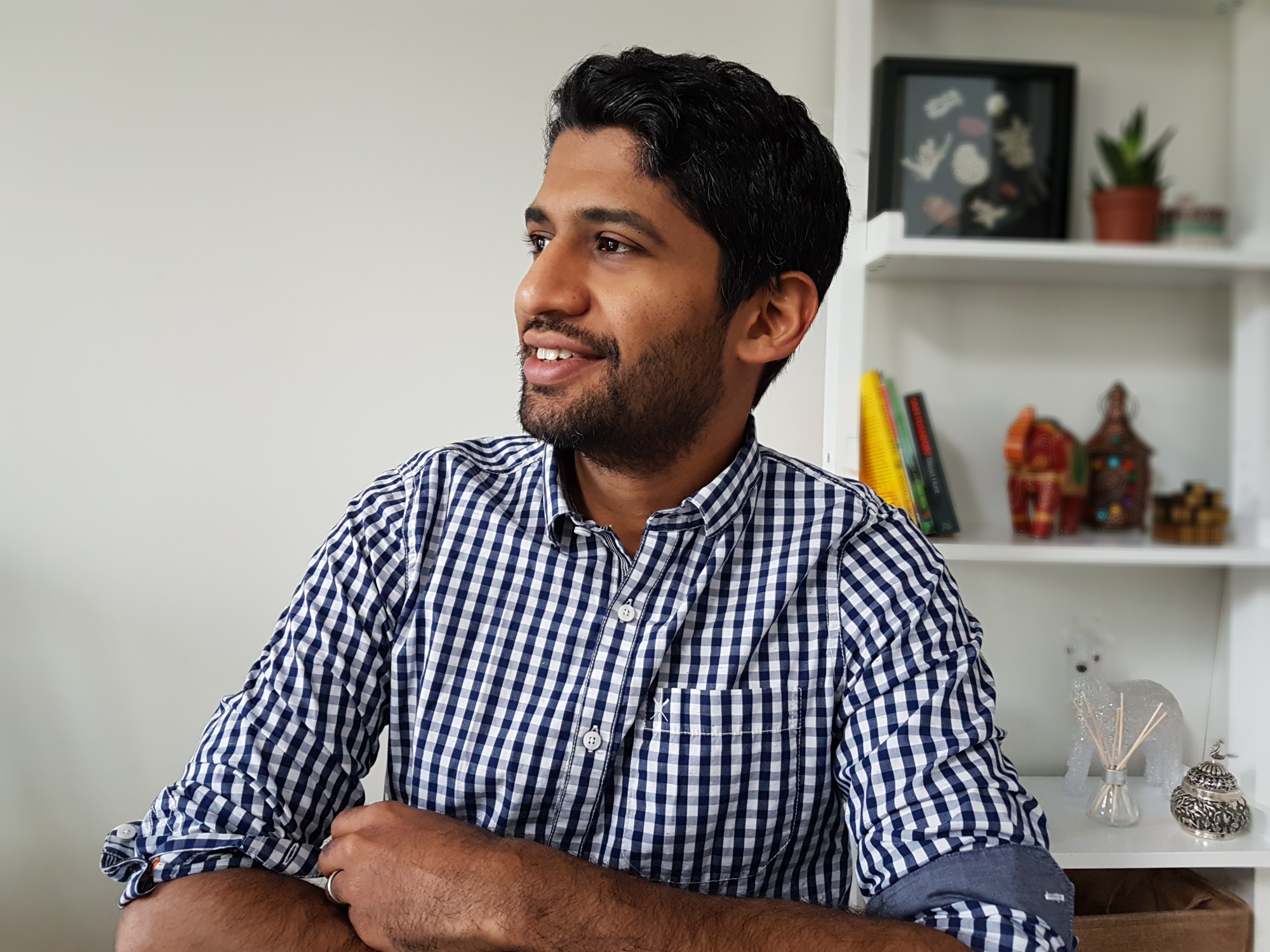 As a kid growing up in Southern India, I used to wait to see Helsinki and Finland in the weather segment of the news, because the temperatures were usually low, and it was exciting to imagine life in such cold places.

I heard more about the country in my teens, maybe early 2000s, when Nokia phones started popping up everywhere around me. Mobile telephony had just started to get popular in India, inspiring a whole generation of kids to do something in Telecommunications.

Nokia inspired me to pursue my education in wireless communications. After my bachelor’s degree, I was fortunate to get selected to work with Nokia Networks in India. This was when I really started to learn about Finland and I got to meet Finnish colleagues. I was impressed by their knowledge, dedication and general attitude towards life. After researching about the education system in Finland, I decided to come to Aalto University in Espoo in August 2011 to continue my university education.

Nokia inspired me to pursue my education in wireless communications.

It was exciting to move to Finland, a country which is so extremely different from my own. There is probably nothing similar between India and Finland. The weather, the cultures, the population and the food habits, everything is almost the opposite of each other. The first taxi ride from the airport to my student apartment was quite funny when I tried to make small talk with the driver, but was met by little or no response. I knew life was about to get interesting.

At the university, the independence given for the students to choose subjects they wished to study based on their interest, not necessarily their areas of specialisation, impressed me. There were a lot of close research collaborations between the university and industry, which was quite different from what I had grown up with, where the curriculum was rigid, and academics and industry were quite isolated from each other. This, along with the enthusiasm of the students with Erasmus activities or the student guilds were awe-inspiring.

All this was very different from India where there is so much competition and pressure to perform well academically that students sometime tend to forget to relax and enjoy life. Addressing professors and seniors by their first names was a little shocking at first, but being respectful without unnecessary formalities was a welcome change.

Addressing professors and seniors by their first names was a little shocking at first, but being respectful without unnecessary formalities was a welcome change.

The university was the first time in life I was meeting so many people from such diverse backgrounds. I remember watching the opening ceremony of the London Olympics in 2012 at a pub in Helsinki with my group of friends. There were 7 of us from 6 different countries, from 5 continents! That’s not something you see everywhere. Experiences and interactions like these in Finland made me learn so much, and grow as a person.

But just when I was getting used to Helsinki, I received a job offer from Nokia in Oulu, and decided to move even further North. So, in two years, I moved from a city in India with a population of over 10 million, to a small city with about 200,000 inhabitants.

Soon after moving to Oulu, I had to visit Helsinki to attend my graduation ceremony. I think it was mid-March 2013, and it was exceptionally cold that month. The return train to Oulu was delayed, and I missed my local bus connection home. I had to wait for an hour before I could take the next bus. I was hungry and cold, and a little spoilt by the public transport of Helsinki. Most restaurants in Oulu centre were already closed as it was Sunday evening. There was one pizzeria which was about to close for the night, next to the bus stop, and the only option was take-away. I remember sitting at the bus stop, pizza in my hand, with no knife or fork, and too cold to take off my gloves to eat, feeling miserable and beginning to question my life decisions. Just then, the skies lit up to a bright shade of green, and auroras were dancing above my head. It felt amazing, and I instantly fell in love with this city.

Another thing that helped me grow stronger in Finland was the weather, especially up North here in Oulu. The weather here teaches you that life will be hard unless you take care of yourself, and it’s so different from the tropics where the weather is mostly taken for granted. The darkness in November and December can be quite intimidating. It’s difficult unless you keep yourself occupied with something like sports or exercise.

The weather here teaches you that life will be hard unless you take care of yourself.

The sports facilities in Finland are amazing. They are well maintained and easy to use for all, not reserved just for the elite. Sport has now become a big part of my life in Finland. There’s floorball, football, some tennis and a lot of cycling and cross-country skiing on the beautifully maintained tracks of Oulu. There’s always something to do, even in the coldest days of winter.

As a hobby, I now play for a local Gaelic football club in Oulu, and have made so many new friends through it. In a recent tournament, our team of 15 representing Oulu were from over 10 different countries. It was sweet to beat visiting teams from Helsinki and Jyväskylä, and win the tournament. I haven’t felt more “oululainen” ever!

Although most of my experiences have been positive, there have been a few hiccups in between. The general attitude of some people around the time of what was dubbed the refugee “crisis” in 2015 was different. A little hostile in the late evenings especially towards a person who looks like me, even when I was surrounded by my Finnish friends. But that phase has passed, hopefully for good. I think the whole episode initiated discussion and spread awareness among the general populace. A little bit of nepotism exists, but I think that is to be expected when the society itself is quite small, and people would prefer working with someone they know, rather than someone they have never interacted with.

I occasionally miss the aromas, spices and the sheer variety of food that we find in India.

In my opinion, the society here is itself quite solitary. Sometimes, I miss the close-knit families and neighbourhoods we have in India. In my six years of living here, I don’t think I have ever had a conversation with my neighbour that has gone beyond the usual greetings. I did accidentally meet some acquaintances during an event, and ended up discovering we live in the same building. News of loneliness among the old folks, and the growing isolation among the young is disheartening. Maybe there is something for Finland to learn from India about family ties, and being there for each other as a family, not just to celebrate Christmas, but also during the dark times. I think the sense of community is something Indians have grown up with, and I guess it is still being followed by the small but active Indian community in Oulu. We meet a few times every year to celebrate festivals like Diwali [festival of lights] and Holi [festival of colours], and are always there for each other. We also try to meet up and have some good Indian food.

On a lighter note, I think there are also lessons to be learnt by Finland from India about good food. I occasionally miss the aromas, spices and the sheer variety of food that we find in India, and most of the ingredients are not available in Oulu.

The results of my cooking with local ingredients are getting better every time, maybe a fancy term like Indo-Nordic fusion cuisine may make it even more appetising. But who knows what the future holds for us food lovers, especially since Nordic cuisine is beginning to trend worldwide?

Moving from India to Finland was a big change, but I feel welcome here, and Finland feels like home now. Oulu, specifically, has a very large talent pool in technology. Some of the best minds in the world of telecom are based here, and I think more innovations are being done here than any other region in Europe. It’s a dream destination for a telecom engineer like me. It’s where I feel like a local.

I think I will always be identified as an Indian, but every moment I spend in this amazing country will add a little more of Finnishness inside me, and I’m proud of that mix. I got married in April this year, and my wife, who is also an Indian, moved to Finland in May.

“Sometimes I feel I was born by mistake in Italy”

“I googled if there were bears in the Central Park”