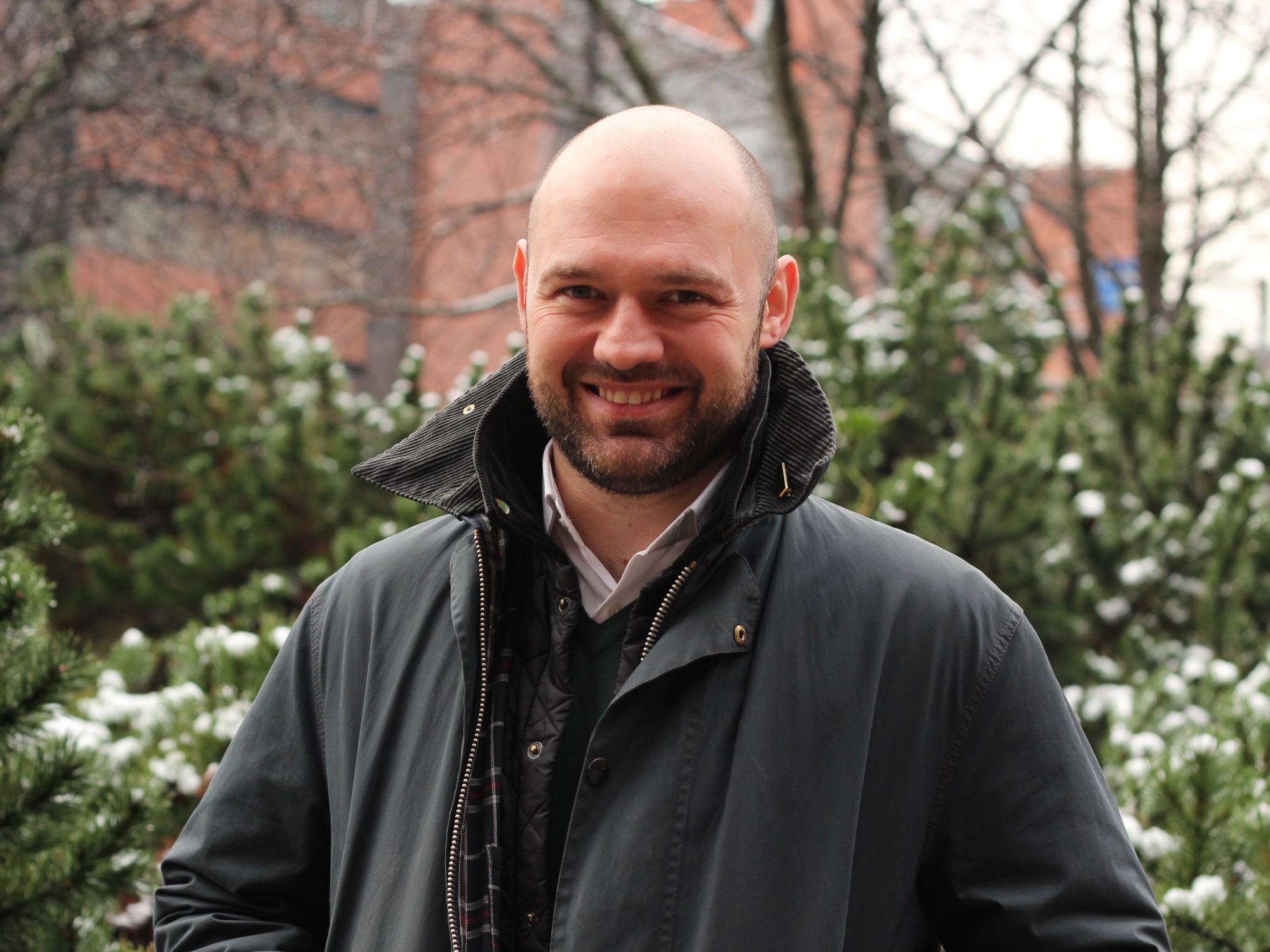 I heard a Frenchman – my old colleague – say that he was afraid of losing his Frenchness in Finland.

When I lived in Vaasa I didn’t have much contact with other British people. There was just this Glenn, who everybody knew. He kept quite a bit of his Britishness, manners and accent. At the time, I felt guilty that I had let so much of my Englishness slip. But that was my understanding of what you need to give away in order to integrate. It’s hard to judge if it has been good or not, because I only notice it when I’m back in Britain – my accent being one of the things.

Going back to the Frenchman, I think traditions are a thing we judge a culture by. So he was losing the traditions, he had a Finnish wife, Finnish kids… He said the funniest thing; that the one thing he had not lost about him was his French driving style.

I’m not in contact with that many Brits and most of my friends are Finnish. I did get the invitation to the Embassy in relation to Brexit, but the idea of being there with 200 angry Brits was not appealing to me. I only deal with the Embassy to confirm my status.

I would never identify myself as an ‘expat’, I refer to myself by the very unpopular term ‘mamu’. I have left my country and migrated. I might call myself an expat if I had not integrated in this country on the basis that I had no intention to stay here long term or I couldn’t be arsed to learn the language or I couldn’t be arsed to assimilate to the Finnish society.

PETER THOMPSON: “I felt guilty that I had let so much of my Englishness slip. But that was my understanding of what you need to give away in order to integrate.”

I think you need to keep what’s important and give the rest away. Finland is not that interested in modifying itself for others and it’s quite traditional in the ways it works. And that is why it works. I would not say that I have fallen in love with Finland, but I have taken it to heart and I’m protective of it. If I’m in Sweden and they are joking about Finland I feel like I have to bite my lip.

I originally moved to Finland because I had a Finnish girlfriend, but I didn’t know she was Finnish when we met because she had an English accent. I had no particular aspirations to see the world and we all know that if I had got a job in the UK I would never have moved to Finland… So we came here. I am from Newcastle and I was thinking of going to Scotland. London was not an option, I didn’t want to go further South. My plan was to get a relatively good job and move within those areas.

The next thing I knew I was in Pohjanmaa [Ostrobothnia]. I arrived at Christmas and the place was something else. It was -23 on my first day. I made a couple of rookie mistakes. My mountain bike arrived in the blizzard.. I didn’t know about the huge ditches on the side of the roads because they were covered with snow, so I decided to just pop over and in I went to the ditch, covered in snow, all the way to the handlebars. People watched me do this.

A couple of days later it was warmer and I had a 15-minute journey. So I thought that if I went really quickly I’d be okay without hat and gloves. Then I had headaches for three days. I didn’t get any feeling back in my hands for a couple of hours. My introduction to Finnish weather was ‘don’t be stupid’.

PETER THOMPSON: “I think you need to keep what’s important and give the rest away. Finland is not that interested in modifying itself for others and it’s quite traditional in the ways it works.”

Christmas in Finland is extremely different. During my first Christmas in Seinäjoki, I remember wondering when we would start drinking and start the party. I mean, here it’s about going to dead people’s graves. Very much a reflective period of the year. Remembering all the relatives. A very peaceful and solemn experience, which is not what I was expecting to be completely honest. Because of the drinking culture here I thought there would be at least one day with a big blowout. But one thing I appreciate with the Finnish Christmas is the anticipation of Santa Claus coming. That’s something the children don’t get in the UK. We used the local Scouts and they were really good and had good answers to the tricky questions like ‘Where are your reindeers?’

I worked for the Finnish electronics manufacturer Elcoteq from 2001 until they were sold in 2004. I had a group of friends who were all Finnish lads, my colleagues. I only heard afterwards that when I was being interviewed for the job the boss asked the entire department how they felt about hiring an English speaker. They all said yes, I did the interview and got the job a few months after I arrived in Finland.

I met my wife in 2006. I was living in Vaasa at the time. We were neighbours. I was coming back from the gym and I was struggling to get the door open, my key didn’t work very well. Then she arrived at the door and spoke in Finnish to me. I was a bit shocked because I didn’t expect anyone to speak to me. I answered in English and she had been living in Holland, therefore her English was very good. I don’t think she knew she had a foreign neighbour.

We just started talking and then bit by bit… She was doing her thesis and I thought she’d like to listen to some calm music when doing that so I made her a CD of Jose Gonzalez. We were working at similar times so we would bump into each other in the mornings from time to time. Then we went from there. Going for walks in the snow, sledging and stuff like that.

PETER THOMPSON: “I suppose I miss the general pub type of conversations, political arguments and general conversation that can happen between strangers on a regular basis. That I miss. Other than that it’s not that much.”

Why I am still here is a variety of smaller things that together make something large. You become intolerant to certain things when you live in Finland. One of them is lack of punctuality, it drives me insane. It used to mildly irritate me in Britain, because it so widespread. In Britain when I meet my old friends I lie to them. I say let’s meet at 5.30 if I’m planning to go there at 6.

The water taps in Britain I find infuriating. It seems so illogical. The English milk is better in the UK because the cows are fed with green grass all year around, it’s not just me, also my kids go nuts for it. I suppose I miss the general pub type of conversations, political arguments and general conversation that can happen between strangers on a regular basis. That I miss. Other than that it’s not that much.

I have had some friends visit, but it’s still the thing that I left the country so I should make the effort to do the phone calls, keep contact and so on. I’m not defined by the country I was born in and that’s a part of my integration. I no longer feel I’m a better person because I was born in Britain. I am defined by what I do and I have found something that’s more inline with me and things in Finland work.

Kamal, Lebanon: “I would be crying because of the snow and 2010 was the coldest winter, very cold”

Amjad, Pakistan: “I just strongly feel that people need to meet each other. That’s why I wanted to share my story”

Andruta, Romania: “Seeing other women were so comfortable with nudity in the sauna made me more willing to embrace my own body”

Interview by Peter Seenan recorded in Helsinki, Finland in 2017. If you wish to support our work in projecting the nuanced reflections of immigrants in Finland please like our Facebook page and share Peter Thompson’s story.